Posted on June 18, 2018 by visibleprocrastinations 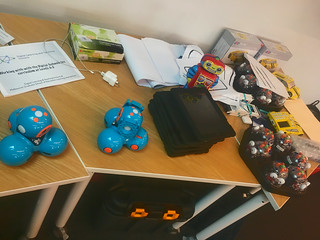 * Connect to Evo with an App | Ozobot – https://ozobot.com/play/apps
Your social robot is app-enabled.
Connect with friends, compete in games and learn to code.
All in one place.

* Blockly | Google Developers – https://developers.google.com/blockly/
Blockly is library that adds a visual code editor to web and Android apps. The Blockly editor uses interlocking, graphical blocks to represent code concepts like variables, logical expressions, loops, and more. It allows users to apply programming principles without having to worry about syntax or the intimidation of a blinking cursor on the command line.

* https://www.robotlab.com/blog/blockly-vs-scratch-whats-best-for-me (2017-Aug-21) [RobotLab]
Learning to code can sometimes seem overwhelming. I remember when I was making the leap from learning vocabulary and syntax to creating an entire program I experienced some writers block. I had all the tools I needed, but I didn’t know where to begin.
Enter Scratch and Blockly: two programming environments that use a graphical interface of interlocking blocks to make coding easier for new programmers.

* What’s New in OzoBlockly Mode 5? (2018-May-25) [Ozobot Blog]
This week we launched Mode 5, aka Master Mode, of OzoBlockly. OzoBlockly is the Ozobot editor, based on Google’s Blockly, that lets you code Evo and Bit and teach your robots new tricks. Read below for a breakdown of everything that’s new in Master Mode!

* The Lion, the Witch and the Wardrobe voted the children’s book most adults want to read again (2018-Jun-01) [The Independent]
TOP 30 – CHILDREN’S BOOKS ADULTS WANT TO RE-READ

This entry was posted in 2018, links. Bookmark the permalink.